Among Bay Area bookstores, Book Passage in Corte Madera has one of the most active schedules going of author events, readings, classes and other literary happenings. In fact, it’s not uncommon for more than one or two author talks to take place at the store just about every day. Additionally, many of these events have a local connection. Looking to the week ahead, here are three events you won’t want to miss. 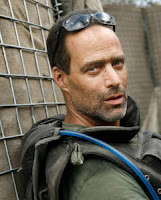 Sebastian Junger, author of The Perfect Storm, turns his attention from man’s struggle with nature to man’s struggle with man. In War, Junger turns his empathetic eye to the reality of combat — the fear, the honor, and the trust among men whose survival depends on their absolute commitment to one another. His on-the-ground account follows a single platoon through 15 months in Afghanistan’s Korengal Valley.

Junger is an American author, journalist and documentarian most famous for the best-selling book The Perfect Storm: A True Story of Men Against the Sea, which was made into a feature film in 2000 starring George Clooney and Mark Walhberg. He also self-financed and directed a documentary movie Restrepo (2010). It was nominated for the 2011 Academy Award for Best Documentary.

Due to the expected popularity of this event, priority seating will be allotted to those who purchase a copy of Junger’s book from Book Passage.

Meredith Maran will read from her just released novel, A Theory of Small Earthquakes (Soft Skull Press), and filmmaker Johnny Symons will show a brief clip from his award-winning 2002 film, Daddy and Papa, and together they’ll discuss the challenges and joys of portraying non-traditional families in books and film.

Maran’s earlier books include Class Dismissed: A Year in the Life of an American High School, A Glimpse into the Heart of a Nation and Dirty: A Search for Answers Inside America's Teenage Drug Epidemic. Her new book, a debut novel, has been praised by publications ranging from Reader’s Digest to Vanity Fair. Marin writer Anne Lamott called it "A smart, sexy, funny, wrenching, delicious story of lust and trust and love and family."

Symon is an Emmy-nominated documentary film and video maker based in the San Francisco Bay Area. His film Daddy and Papa (2002), about the personal, cultural, and political impact of gay men raising kids, premiered at Sundance, won more than 15 major festival awards, and aired nationally on PBS. His other documentary credits include 1995’s The Celluloid Closet for HBO.

Activist Eve Ensler sits down with writer Isabel Allende to talk about activism, women and girls, and the power of stories. The event is described thus: “Eve will blow you away and Isabel will get you through it. And together they will fill you with hope.” The event also includes a sneak peak at Ensler's latest theatrical work, the stage adaptation of Emotional Creature, which will premiere at Berkeley Rep this June.

The former Louise Brooks-bobbed Ensler is the Tony Award-winning author of The Vagina Monologues and founder of V-Day, the global movement to end violence against women and girls. Her most recent book is I Am an Emotional Creature: The Secret Life of Girls Around the World (Villard). Allende is a Chilean writer and now longtime resident of Marin. She is the author of  The House of the Spirits, an international bestseller which was made into a film, and more than a dozen other works. Allende’s books have been published in more than two dozen countries. In 1998 she was awarded the Dorothy and Lillian Gish Prize, and in 2011 she was given the Hans Christian Andersen Literature Award.

This event is a benefit for V-Day, the global movement to end violence against women and girls. It takes place at Dominican University of California, Angelico Hall, in San Rafael. Tickets are $35.00 and include a copy of Ensler’s book I Am an Emotional Creature. A book signing follows the presentation.