Adam Mansbach's spoof children's book, Go the F*ck to Sleep, has been flying off bookshelves and delighting exhausted parents since it was published this spring. Profane, affectionate, and radically honest, California Book Award-winning author Mansbach’s verses perfectly capture the familiar—and unspoken—tribulations of putting your little angel down for the night. On Monday, October 17th at 7:00 pm, Adam will read and discuss his new book at Book Passage in Corte Madera, CA. Please join us, but leave the kids at home! 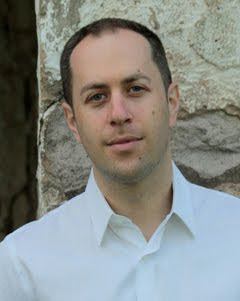 Zack Ruskin: What was the process that took place between you having the idea for your book and it being parlayed into an actual published title?

Adam Mansbach: I thought of the book one night after putting my daughter to bed, and I jokingly posted on my Facebook: “be on the lookout for my upcoming children’s book, Go the F*ck to Sleep”. I was just kidding around, but in writing that, I realized, yeah, I know how to write that book, that might be a funny book to write. So it started percolating in my mind, and then a week or so later, I actually sat down and wrote it. From then on, it was conceptualized as something that would be a book, never on the web. I think some people have written or been mistaken in thinking that the book was first posted on Facebook, verse by verse. I had the initial idea while fucking around on Facebook, but then I sat down and wrote the book. Then, much later in the process - the book originally was supposed to be published in October, a couple weeks from now -in late April, I did a reading of the book, in Philadelphia at an art salon, and it went over really well. People started buying the book, pre-ordering the book online, and that sent the book skyrocketing to number one on Amazon. A week after that, a PDF of the book leaked. We had sent an early PDF of the book to booksellers, basically to try to get some support from them, blurbs and so forth. That PDF got leaked and started ricocheting around the internet, so at that point there was this pirated copy. We didn’t do that. We were actually sort of terrified. We thought it meant no one was going to buy the book. Luckily though, it’s bad form to show up at a baby shower with like a low-resolution, printed-out PDF that you pasted together.

Zack Ruskin: Once you’d written the text for the book, did you find that publishers were pretty skeptical of it as an idea, or did they think it was pretty sure-fire once you pitched it to them?

Adam Mansbach: I didn’t send it out to publishers. I really only sent it to Akashic. It wasn’t something I submitted broadly. I only took it there, both because I thought it might appeal to them, and also because I like the work they do, and Johnny Temple is a good friend of mine. I’ve done some things with them in the past. I remember the selection of people who saw the book. Johnny was the only person in the publishing world who got a look at it and he jumped on it. He thought he might be crazy to jump on it; it was somewhat uncharted territory for all of us. He did some research, showed it around to people: a distributor, bookstores. We got really good feedback, so we decided we should go ahead and take a shot at it.

Zack Ruskin: Were you guys pretty committed from the outset that you were going to keep all the profanity and not change any of that to try to cater to a larger audience?

Adam Mansbach: Yeah. That was the book, and that was the fun of the it. We were always very clear on that. There was never any question of cutting the cursing out or anything like that.

Zack Ruskin: I read recently that you’re doing a new version of it that doesn’t have cursing in it, a version that could actually be read to kids.

Adam Mansbach: We’re doing a kind of companion volume that’s actually intended for kids in the spring. It’s called, Seriously, Just Go To Sleep. It’s in no way meant to replace the original -- it’s a different book. It has different illustrations, and different verses. It’s very much related to the original, but it’s not a replacement.

Zack Ruskin: Was Seriously, Just Go to Sleep based on feedback from people saying to you or Akashic, “God, I wish I could to read this book to my kid, but I’d be a bad parent if I did”?

Adam Mansbach: That’s exactly right. It was also a lot of people saying, I do read this to my kid, but I have to censor it as I go. We figured, let’s give them something where they don’t have to do that, and they can read the words as they actually stand, the way they’re intended to, and kids can enjoy it. 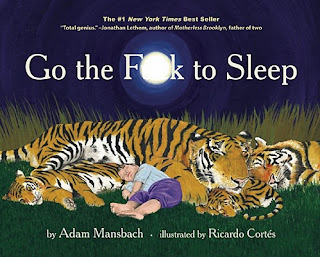 Zack Ruskin: As far as the illustrations go, was there a type of kid’s book, or a specific book that you drew inspiration from?

Adam Mansbach: No, it was really more that I knew Ricardo would be a great illustrator for it, and I just reached out to him. He’s an old friend of mine, and I liked his work and admired his work for years. We’d actually worked together in the past, way back in the day, when we were back in college on a hip-hop magazine that I started called Elementary. Ricardo was the art director for it. I had a conception of what the illustrations should be like, that they should essentially play the straight man. The verses were going to be where the humor lay, and so it became clear that Ricardo’s job was to play counter-point to the words. We wanted each illustration and verse to have a unique relationship to one another, so that it wasn’t too predictable, so that we would keep readers guessing a little bit about how it might play out. Ricardo’s style is so beautiful; in a way I think the book gave him liberties to be as cloyingly sweet as he wanted to in places, because the verses were going to counter-punch that. The illustrations were sometimes straightforward, sometimes a bit subversive. They have little touches, and in the children’s version, there’s even more of that, because now we get to play off the original book. Readers of the original book might get a little kick out of seeing how we flipped it up.

Zack Ruskin: You’ve found out Go the F*ck to Sleep is going to published. Do you have any sort of inkling that people are going to crazy for it, that it’s going to become a de-facto baby shower gift?

Adam Mansbach: I didn’t have many expectations. I was just tickled that the book was going to be published at all, because it was wacky. It didn’t fit into any genre. It was this crazy thing that I’d written for my own amusement, so really I was excited that it was being published at all. It’s funny - it was exactly a year ago that I sent Johnny my initial email. The other day he dug it up, the original email I sent him to pitch the book, and in that email, I’d completely forgotten about this, I said something to him like, “I think every parent in the world can relate to this”. Partly that was me pitching a publisher, but I think I did believe that too. I didn’t have any expectations, but I guess I thought that at most, it would become this kind of cult classic/niche thing. I never dreamed it would have the mainstream encouragement it’s had, or that we’d sell the number of copies we’ve sold. That definitely never entered into my mind. I’d have to be some kind of asshole to have anticipated this level of success.

Zack Ruskin: That’s true. There’s only one way to answer the question. You can’t be like, “of course I thought it would be huge!".

Adam Mansbach: (laughs) Oh yeah, I knew this was coming. I bought a Bentley in anticipation of this happening.

Zack Ruskin: Now that you have this under your belt, and soon the kid’s adaptation too, are you pretty well set in the genre? Is Akashic maybe hoping that you’re going to think of something else that would sit comfortably on a shelf next to Go the F*ck to Sleep?

Adam Mansbach: I wouldn’t rule out doing something in a similar vein at some point, but I’m certainly not in a rush. I don’t want to be the guy who takes a good idea and beats it into the ground, and does successively less funny books until everybody is like, “oh, give me a fucking break, you’re such a cheeseball”. I was writing novels before this, and I’ll continue to write novels after this. I have a bunch of other projects coming out, and they are not obscene, fake children’s’ books. I have a new novel coming out, a graphic novel on the way, a couple thrillers I just did a deal for and I just sold a TV show. So I have a bunch of other shit on my plate.

Zack Ruskin: Is your graphic novel an original work?

Adam Mansbach: Yes it is. It’s called Nature of the Beast. I’m really psyched about it. It’s kind of an action-adventure-sci-fi thing, and it’s pretty crazy.

Zack Ruskin: Is it a self-contained thing or is it the first volume of something larger?

Adam Mansbach: It’s a self-contained story. It’s like 235 pages, so it’s a pretty substantial piece. It’s full-color and beautifully illustrated by Owen Brozman. I wrote it with a buddy of mine named Douglas McGowan. Doing that much art takes a long time, so this has been in process for years at this point, and I think we’re ready to let it out into the world.

Zack Ruskin: I want to make sure I ask you about the audio version of Go the F*ck to Sleep, which is amazing. I’m curious if before Sam Jackson came on-board, if you had a little hit-list of names, like “if it could be any of these five people, I’d just die”?

Adam Mansbach: They asked us for suggestions, so we put a list together, and we totally had our dream list of people. Sam was one of them. So was Christopher Walken. Werner Herzog, who ended-up recording a version for us, was on there. Then I had some more whimsical choices of my own. I would like to hear Slick Rick do the audio version, for instance. That would mean a lot to me personally…probably not to anyone else.


Zack Ruskin: I’ll keep my fingers crossed for that to happen.

Zack Ruskin: What was it like when you first heard Samuel Jackson read your book?

Adam Mansbach: Actually, the first time I heard him do it was the day the book was published. We had our launch party at the New York Public Library and a friend of mine played it for me and took photos of my reaction to hearing it for the first time.

Adam Mansbach: My face made expressions I didn’t even know were possible.