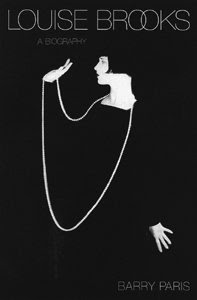 Each contributor is given approximately 100 words to tell about their most treasured volume. Because of these constraints, it is a difficult assignment; however, because of its topic, it is also an easy assignment. This is the book we value the most, and we want to tell the world about it.

I recently had the honor of being asked to contribute. (The "I" in this case is Book Passage staffer Thomas Gladysz.) My most treasured book is Louise Brooks, by Barry Paris. First published by Knopf in 1989, it is the biography of a silent film star. I am sure you might recognize her image. She is something of an icon, and there have been other books both by and about her.

Because of the 100 word limit, it was difficult for me to express how much this book means to me, and how it "changed my life." My contribution appeared in the print version of the newspaper on Sunday, and showed up on-line today.blogged by thomas gladysz