Maria Semple’s Where'd You Go, Bernadette is really good. And, it's taking the country by storm. And, we have autographed 1st edition copies. If you haven't already ordered a copy (by clicking on the link above and noting "signed 1st" in the comments field), then why not?

The book has already received a RAVE review from Janet Maslin in the New York Times, who began her critique by noting the books' “free-range hilarity!”

And in the Los Angeles Times, Carolyn Kellogg stated "She has written a fantastic, funny novel. Its affecting characters, not-necessarily-nice humor and surprising plot twists make this novel
an enchanting ride."

Oh, and Jonathan Franzen said, "The characters in Where'd You Go, Bernadette may be in real emotional pain, but Semple has the wit and perspective and imagination to make their story hilarious. I tore through this book with heedless pleasure."

Similarly, Kate Atkinson said  "Where'd You Go, Bernadette is fresh and funny and accomplished, but the best thing about it was that I never had any idea what was going to happen next. It was a wild ride..."

So, just who is Maria Semple? Her first novel, This One is Mine, was set in Los Angeles, where she also wrote for television shows including Arrested Development, Mad About You, and Ellen. She escaped from Los Angeles and lives with her family in Seattle, where this,
her second novel, takes place. 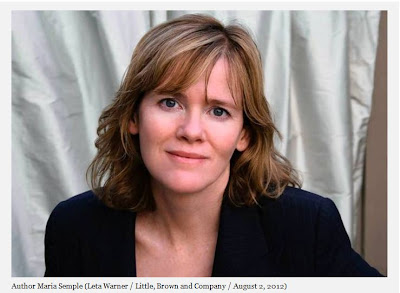 If you haven't already ordered a copy of Maria Semple’s Where'd You Go, Bernadette, then why not?
We at Book Passage love it! Posted by Thomas Gladysz at 3:29 PM