Heather Poole: Come Fly with Her 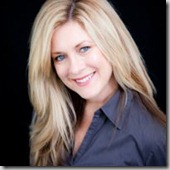 On my wife’s birthday, I took flight attendant Heather Poole with me to Las Vegas. Five days later, I brought her home for a brief stay. And my wife didn’t mind at all.

But Heather and I are finished.  You can have her.  And odds are,

soon or later, you’ll find her at the newsstand or bookstore at any major airport in the U.S. and abroad.

Of course, unless you happen to be on a commercial flight that she is working, it won’t be Heather you’re picking up.  Instead, it will be her recently released book, Cruising Attitude: Tales of Crashpads, Crew Drama, and Crazy Passengers at 35,000 Feet that will be along for the ride.

When I first picked up the review copy of Cruising Attitude from HarperCollins Publishers in New York that landed on my desk, I figured that it would merely be a collection of titillating accounts of sexual encounters, in the air and on the ground, between flight attendants, pilots, and passengers, along with reports of bizarre on-board behavior. After all, the author’s online column is called Galley Gossip.

To a certain extent, my initial guess about the nature of the book’s content was correct. Here’s how Poole described one in-flight fracas:


“And then there was the eighty-something-year-old woman who decided to disrobe after takeoff because she ‘wanted to get off the bus.’ I don’t make the connection either.  But she attempted to do this by wrapping her wrinkled fingers around an emergency exit door handle while screaming, 'Let me off this thing!'  I’m not sure which scared the passengers more, seeing someone so frail freaking out nekkid or watching a young male coworker wrap himself around her uncovered lady bits to try with all his might to unsuccessfully pry her fingers off the door—a door that cannot be opened in flight regardless of how badly an elderly lady nudist may want to get off.”

As a newly-minted flight attendant, Heather Poole was required to dress more modestly than her more experienced colleagues and the women passengers whose “…skirts and dresses [were] as short as Heather Locklear on the original Melrose Place television series.”  By comparison, Poole said that she “looked like an Amish woman who had gotten lost and stumbled onto an airplane.”
When an airline pilot spotted a flight attendant wearing a uniform with a low hemline, he knew he was looking at a rookie.  Poole says that some pilots were


“…known to prey on flight attendants right out of training.  Because we were young and dumb and unaware of the reputation some of these guys had, most of us found it flattering to be at the receiving end of their attention.  In fact, one of my roommates, a “Cockpit Connie,” enjoyed it so much that when she finally got off probation she didn’t run straight to the tailor like the majority of us did.  She left her hemline as long as possible so she could entice even more pilots into her layover hotel room late at night.”

Pilots with a wayward eye for female flight attendants are just asking to be “grounded” as these two “love encounters” that Poole relates in the chapter “Dating Pilots” show:


"One lucky [pilot] became the subject of jump-seat [where the flight attendants sit] conversation when his wife and mistress were paired together to work a trip.  Imagine how he must have felt when he pulled up that list of crew names!  While his wife raved about her amazing husband, the girlfriend shared intimate details about her hot new man.  Surrounded by passengers, a midflight fight broke out between the pissed-off mother of two and the young hot mistress who had no idea her perfect boyfriend wasn’t so perfect after all.  A different mile-high love triangle went down a little more peacefully when, instead of coming to blows, two flight attendants agreed to confront the wandering groin at the airport.  They stood, side by side, arms crossed, at the top of the jet bridge just waiting for the bastard to walk off his flight.  I wasn’t there to see the end of it, but I’m sure the passengers seated in the surrounding gate area went home with quite an interesting story to share that day.”

But there’s a lot more to Cruising Attitude than the mere retelling of flight attendant “war stories.”

Come Fly with Me, Then 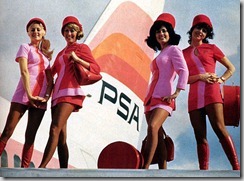 If you flew during the “golden age” of air travel, long before the 9/11 attacks and the demise of “frills” like meal service in coach, waiting at the airport to catch a flight was a pleasant experience, and winging your way through the sky was glamorous and fun.

In those long-gone days of Coffee, Tea or Me?, you would most likely be flying with all-female cabin crew: Young woman chosen for their good looks and dressed to kill, sirens of the air design to lure male customers to come fly with them rather than their counterparts working for a competing airline.

Today, the only way to experience that bygone era of commercial aviation is by watching a movie like Catch Me If You Can in which Leonardo DiCaprio impersonates a Pan Am pilot:

Come Fly with Me, Now

So what should you do if, in your heart of hearts, you believe that flight attendants today are living the life you dream of pursuing?  Before you fly off into the sunset to join Heather and her colleagues up in the air, and after telling your boss to take that boring 9-to-5 job you’ve been working at for years and shove it off onto someone else, you’d best read Cruising Attitude.

The first place the airline will send you after you are hired is what Poole calls “Barbie Boot Camp.”  The Marines are looking for a “few, good” recruits and so are the airlines.  Look to your left, look to your right, and you’ll see flight attendant schoolmates that will “wash out” of the course.

Yippee, you graduate from training!  Now what?

You’ll be at the very bottom of the flight attendant totem pole, subject to being called  to work on very short notice. You may need to “commute” from where you live to an airport far away, all at your own expense.  If commuting won’t work for you,  you’ll probably bunk in a dormitory style “crash pad” with your peers. You’ll get poor pay and no free travel passes while you are on probation.  And you can be fired for the slightest infraction of the company’s rules.

Cruising Attitude is a “must-read” for anyone intent on a career as a flight attendant.  Chapters like “Unhappy Holidays” and “Flying Freak Show” serve as “reality checks” for those who want to wear the same silver wings that Poole pins on her uniform.

Even if you have no desire to follow in Poole’s footsteps up and down airplane aisles, reading her book while airborne will prompt you to glance about and see if any of the “characters” from Cruising Attitude are on-board with you.

How Was My Flight?

I started reading Cruising Attitude while waiting for the Southwest Airlines plane that would carry me from Oakland to Las Vegas to pull away from the gate. Like that flight, the book is of moderate length, and doesn’t take too long to complete.

Cruising Attitude emulates an aircraft in other ways. In the first chapter or so, it taxis slowly, bumping its way along. Then interest starts to build as Poole pushes the storyline forward and the book begins to take off. By the time you get to the chapter entitled “Cruising Altitude,” you’ll be halfway through your literary journey and enjoying the ride.

When you see that the final chapter of Cruising Attitude is entitled “I’ll Never Quit!” you know that despite what Poole says in Chapter 13 (“Turbulence”), she hasn’t quit working as a flight attendant.
Her decision to stick with her airborne job was undoubtedly influenced by a career move that Poole’s mother made after her daughter became a flight attendant.   But I can’t tell you more without giving away an important segment of the story.

And thanks to “the nice man in seat 10J,” whose identity you’ll have to learn by reading Cruising Attitude, now when Poole returns home after working a flight, she can quickly forget about the crazy passengers she encountered high in the sky.

(Thanks to HarperCollins Publishers for providing a complimentary copy of Cruising Attitude for this review. You can buy the book from Book Passage in paperback or as a Google e-book.)

(From time to time travel writer Dick Jordan posts book reviews under the “Armchair Travel” and “Book Review” sections of his blog, Tales Told From The Road. His last post to the Book(ed) Passage blog was a review of Lost Angel Walkabout by travel writer Linda Ballou.  He is a member of the National Book Critics Circle.

When Dick isn’t traveling, you can usually find him hanging out with other members of Left Coast Writers at the Book Passage store in Corte Madera on the evening of the first Monday of each month.)
Posted by Dick Jordan at 8:00 AM