Some recommended film books published in 2011

There have been a number of excellent film books published in the course of the year. A number of them have looked back to classic Hollywood, and a number of them have been biographies, memories, or biographical or career studies. We've put together an annotated list of what we feel are some of the best films books from 2011. Each can be ordered through Book Passage. 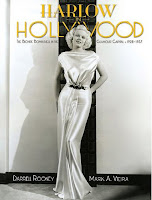 Harlow in Hollywood: The Blonde Bombshell in theGlamour Capital, 1928-1937, by Darrell Rooney and Mark A. Vieira (Angel City Press)
This is Jean Harlow like you've never seen her before. Rooney is one of the foremost collectors of Harlow memorabilia, and Vieira is one of the foremost authorities on classic Hollywood photography. (Vieira has a handful of other recommended pictorial books to his credit). They've joined forces in authoring this gorgeous pictorial which not only tells the story of the life and career of the famous platinum blonde but also features a remarkable assemblage of images, the majority of which are little known. Harlow is lovely in most every one; this equally appealing and elegant book is a fitting testimony to her legend.

Hedy's Folly: The Life and Breakthrough Inventions of Hedy Lamarr, the Most Beautiful Woman in  the World, by Richard Rhodes (Doubleday)

What do actress Hedy Lamarr, avant-garde composer George Antheil, and your cell phone have in common? The answer is spread-spectrum radio, a revolutionary inven­tion based on the rapid switching of communications sig­nals among a spread of different frequencies. Without this technology, many of the devices we take for granted, such as cell phones, wouldn’t work. As it turns out, the idea of spread-spectrum was thought up & patented not by a computer engineer in recent years, but by a beautiful actress and an experimental composer during WWII. Their idea, then, was to create a jam-proof radio guidance system for torpedoes. Pulitzer Prize winner Rhodes tells their story.

As much as anyone – and perhaps more, John Huston was a literary filmmaker; thirty-four of his thirty-seven films adapted important novels, stories or plays. In fact, Huston got his start as a journalist and short story writer before moving on to the movies and work as a screenwriter. Huston’s Oscar nominated success as a screenwriter led to his work as a director. He then made an auspicious debut with a film based on a novel, The Maltese Falcon (1941). Fittingly, Huston’s life story is recounted by a literary scholar in a fine new biography. Meyers’ briskly told biography of the writer, director, actor (Chinatown), and Hollywood bon vivant details one of the more colorful lives of the 20th century.

Luck and Circumstance: A Coming of Age in Hollywood, New York, and Points Beyond, by Michael Lindsay-Hogg (Knopf)

Michael Lindsay-Hogg is a British director best known for his work on stage, on television - notably the much admired Brideshead Revisited, and for his concert films and music documentaries including The Beatles’ Let It Be and The Rolling Stones Rock and Roll Circus. Lindsay-Hogg is also the son of Warner Bros. star and Academy Award nominee Geraldine Fitzgerald - Wuthering Heights (1939). His biological father, as is revealed in this beautifully written book, is none other than Orson Welles.

Myrna Loy: The Only Good Girl in Hollywood, by Emily W. Leider (University of California Press)

Leider, the author of acclaimed biographies Rudolph Valentino and Mae West, has penned a thoroughly researched and stylishly written biography of an accomplished actress who was more than just her screen credits. Leider puts it this way in her introduction. “From day one Myrna Loy’s screen image has conjured mystery, a sense of something withheld, something intriguing because it seems unknowable. ‘Who is she?’ was a question posed in the first fan magazine article published about her, in 1925. This book attempts to fill in some of the gaps and to counter the relative neglect that has befallen her abundant legacy.” Leider accomplishes this and more in detailing the career of an actress whose career began in the silent era and lasted into the era of television.

Pauline Kael: A Life in the Dark, by Brian Kellow (Viking)

For better or worse, and there are plenty on both sides of the fence still willing to argue their case, Pauline Kael (1919-2001) is the most influential film critic of the last 50 years. Not only did Kael influence a generation of critics - namely those we read today, she also affected the climate for filmmaking in America (according to Roger Ebert). Her witty, biting, and highly opinionated reviews - many of which were published in the New Yorker over the course of Kael's 20 year association with the magazine - also made her the most prominent film critic of her time. Kellow's new biography shows what made Kael tick - namely, her love of the movies. In reference to her film criticism, Kael once wrote "I'm frequently asked why I don't write my memoirs. I think I have." Also just out is a 750 page collection of Kael's criticism and essays, The Age of Movies: Selected Writings of Pauline Kael (Library of America), edited by Sanford Schwartz. Consider it a companion book, and a kind of alternative biography.

Along with Frank Capra and John Ford, Raoul Walsh (1887-1980) was one of Hollywood's early mavericks. Walsh's career spanned more than fifty years - from the silent era through the 1960's, and he helped create the American action adventure film. Whether directing a swashbuckler, a Western, a gangster film, a war epic, a drama or even a musical, there was often something of a romantic flair about Walsh's films - much of which has held up remarkably well. The Thief of Bagdad (1924), What Price Glory? (1926), Sadie Thompson (1928), The Roaring Twenties (1939), Dark Command (1940), They Died with Their Boots On (1941), High Sierra (1941), White Heat (1949) and The Naked and the Dead (1958) are all his work. Moss's thoroughly researched book is both exemplary and groundbreaking, as this is the first full-length biography of a dominant figure in the history of film.

Rin TinTin: The Life and the Legend, by Susan Orlean (Simon & Schuster)

Rin Tin Tin tells the story of the famous canine who went from an orphaned puppy found on a WWI battlefield in France to an extraordinarily popular Hollywood movie star (so much so he helped save Warner Bros. from bankruptcy and reportedly won an Academy Award) in the silent era to international icon and television star in the ensuing decades. Rin Tin Tin is also the poignant exploration of the bond between one man (the lonely American soldier who found Rinty) and one dog – as well as a history of 20th entertainment and the changing role of dogs in the American society. As such, this book strays from film history to cultural history - but is nevertheless a great read. In its review, The New York Times Book Review asked “Do dogs deserve biographies?” In Orlean’s hands, the answer is an affirmative “Bark.” 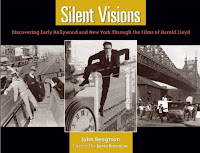 John Bengtson is an archeologist of the cinema. And his new book, the last in a trilogy-of-sorts, is a visual excavation of the past. Following books devoted to Buster Keaton and Charlie Chaplin, Silent Visions now explores the films of Harold Lloyd. Bengtson’s detailed examination and comparison of scene stills and screen captures with old maps, city directories, newspapers, photographs and dusty building records (and yes, Google maps too) reveals not only where Lloyd shot films in Los Angeles and New York, but also how those two great cities have changed in the meantime. “History is hidden in the background of films” is this way lawyer by day / film historian by night put it in a recent interview. Bengtson's new book is a brilliant then-and-now triumph. Silent Visions includes a foreword by 2010 Academy Award winning film historian Kevin Brownlow.

Sitting Pretty: The Life and Times of Clifton Webb, by Clifton Webb and David L. Smith (University Press of Mississippi)
The never finished autobiography of one of the top moneymakers at 20th Century Fox, as completed by David L. Smith. Though his star has waned in the years since his death, Webb (1889-1966) knew pretty much everyone who was anyone during Hollywood’s golden age. This book makes for interesting reading, and includes a foreword by actor Robert Wagner.

Since his death, Spencer Tracy has become one of the cinema’s most misunderstood figures and the subject of unsubstantiated claims, many of which center on the nature of his 26-year, extra-marital relationship with actress Katharine Hepburn. Which is a shame, because Tracy is still considered one of the finest actors in film history The sturdy, congenial everyman won back-to-back Oscars in 1937 and 1938, and in the course of his long career, was nominated for the Best Actor award a record nine times. In 1999, the American Film Institute ranked Tracy among the ten greatest male stars. Spencer Tracy attempts to set the record straight regarding the stories and legends which have grown up around the actor. And that it does in a detailed and definitive manner. This impressive, 1,000 page book concludes with a frank appraisal of the bookshelf worth of recent biographies of Hepburn, many of which the author dismisses.

Ince turned an art form into a business. Progressing from actor to screenwriter and director, Ince revolutionized the industry by developing the role of the producer. In addition to building the first major Hollywood studio - dubbed "Inceville," this industry pioneer and "Father of the Western" had a hand in more than 800 films. Taves chronicles Ince's life from his early days on the stage to his sudden death at a time when he was about to join forces with William Randolph Hearst. Taves details Ince's impact on the Hollywood production system, his creation of the first American movies starring Asian performers, and his cinematic exploration of the status of women. Until now, Ince (1882-1924), one of the most influential and neglected of early moguls, had not been the subject of a biography. This authoritative work, scrupulously researched, offers considerable insight.

This list was compiled by Book Passage employee Thomas Gladysz, an early film buff and the Director of the Louise Brooks Society, an internet-based archive and international fan club devoted to the legendary silent film star. He has contributed to books on the actress, organized exhibits, appeared on television and radio, and introduced Brooks' films around the world. Last year, he edited and wrote the introduction to the “Louise Brooks Edition” of Margarete Bohme’s The Diary of a Lost Girl.

Posted by Thomas Gladysz at 4:05 PM

I highlight these and other film books on Huffington Post at http://www.huffingtonpost.com/thomas-gladysz/best-books-2011_b_1142592.html and on examiner.com at http://www.examiner.com/silent-movie-in-san-francisco/best-silent-film-books-of-2011