On Diplomacy and Weapons in Fairyland

When I first took on my furry little wards, I immediately took them to meet a Shrewdness of pirates. (Individually, pirates may be politely referred to by their surnames or by their naval rank, but as a group they are a Shrewdness, like a flock of birds or a pride of lions. The male form of pirate is Captain, the female is Queen.) I feel it is important for young folk to meet pirates as soon as possible. Hardly another creature could be more suited to lessons in economicks, the care and feeding of one’s sword, and diplomacy. Now, that last is a grown-up sort of word, and I will introduce it to you. (Though it begins with D, my brother Ell felt it very important to introduce myself and our other sibling, T-Through-Z to it early on, since otherwise we should never have been able to agree on where to sit at the dinner table, or who got to play with our best human dolls.) 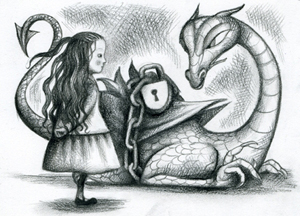 Children, meet Diplomacy. Diplomacy, meet everyone. When Diplomacy was a strapping young lad, it meant having to do with papers and texts and treaties. Its mother was the word Diploma, a thing which, if you are very clever and do not offend to many principals, you will get one of these days. However, in Fairyland, Diplomacy has let its hair down and learned a jig or two, and it now means: getting what you want without also getting a pistol-shot in the eye from a fellow with a feathered hat and more friends than you. Pirates have quite a lot to say on that score. Namely: do not pretend to be weaker or stronger than you are. That only results in having to back it up with martial prowess, and who has the time? Instead, simply confuse the opposing party with a flurry of deftly aimed logical arguments, a volley of rational explanations, and a sound thrashing of economick philosophy. This will never fail to confuse them into believing their treasure, if it has any natural value at all given the false relationship between desire and scarcity, certainly belonged to you to begin with.

The Gunboat Queen of Paraffin Bay is known to her friends as Auntie Arquebus, and she had that day by good chance a litter of swordlets in the belly of her galleon, sweet little things just beginning to show their shine. Truly, you must always raise your sword from its hatching, or it will be unpleasant and disrespectful, running off at all hours to start wars with roving gangs of young rapiers or marrying dashing scimitars quite without your permission. I always make sure my wards have good, house-trained swords, slightly younger than they, so that the little ones will have someone to teach and mold and scold and give treats to.

Afterward the children had chosen their swordlets from the pack, the whole band of us, myself, my wards, Auntie Arquebus and her Shrewdness, spent a lovely afternoon convincing a naval officer that once he and Auntie had traded hats, they had traded stations, since hats are what chiefly define one’s rank and purpose. The young man was still scratching his head as we sailed off on his frigate.

Catherynne Valente is the author of over a dozen books of fiction and poetry, and is best-known for her urban speculative fiction, including Palimpsest (winner of the 2010 Lambda Award), and The Orphan’s Tales: In the Night Garden. The Girl Who Circumnavigated Fairyland in a Ship of Her Own Making, her first novel for young readers, was posted online in 2009 and won the Andre Norton Award—the first book to ever win before traditional publication. Cat Valente lives on an island off the coast of Maine with her partner, two dogs, and an enormous cat.
Posted by Unknown at 8:32 AM

Email ThisBlogThis!Share to TwitterShare to FacebookShare to Pinterest
Labels: Catherynne M. Valente, Nine Lessons from a Wyverary Governouressse, Part Three, The Girl Who Circumnavigated Fairyland in a Ship of Her Own Making