This weekend, The King's Speech

This weekend, the Bay Area awaits two momentous events, 1) the first snowfall in San Francisco since 1976, and 2) the annual Academy Awards ceremony. The store favorite for Best Picture is The King's Speech - that's according to Sam, who organizes our annual Academy Awards pool. It's the one film most all of us have seen, and have liked alot. It's not Sam's favorite, mind you - but, we all agreed to disagree! 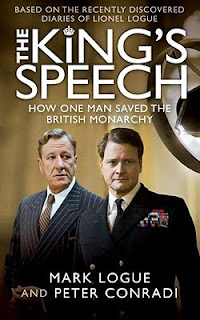 The King's Speech is also the film with the best selling book tie-in. Yesterday alone, for example, we sold three copies of Mark Logue and Peter Conrad's The King's Speech: How One Man Saved the British Monarchy (Sterling, $14.95). The book is based on the recently discovered diaries of Lionel Logue, a speech therapist and one of two central characters in the film. Co-author Mark Logue is the grandson of Lionel Logue. blogged by thomas gladysz

Here's the story in a nutshell. It's the eve of World War II, and King Edward VIII has abdicated the throne of England to marry the woman he loves. Never has the nation needed a leader more. But the new monarch, George VI - father of today's Queen Elizabeth II - is painfully shy and cursed with a crippling speech defect, a terrible stammer. How can he inspire confidence in his countrymen when he literally cannot speak to them? Help arrives in the form of speech therapist Logue, who not only is a commoner, but Australian to boot. Will he be able to help King George find his voice? The King's Speech tells an inspiring tale of triumph over adversity, and the unlikely friendship between a reluctant king and the charismatic subject (considered by some a "quack") who saved the throne.

By Sunday night, it either will have snowed at sea level, or not. And either The King's Speech, or The Social Network, or Black Swan, or Inception, or True Grit, or one of the other ten films nominated will be awarded "Best Picture." And some employee will have won the Academy Award betting pool here at Book Passage.
Posted by Thomas Gladysz at 3:43 PM