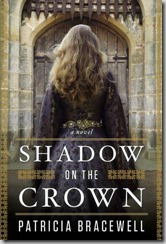 It’s November, 1001 A.D., and the recent death of his wife has left the King of England between a hard place and rock.

He won’t be lacking “female companionship.” After all, he is the king. No woman of his realm would dare decline an invitation to come into his bedchamber for a nightcap.

While he’d be content remaining a bachelor—at least for the immediate future—his advisors are pressing him to remarry, and to do so soon.

As Patricia Bracewell’s debut novel, Shadow on the Crown, begins to unfold its 11th century tale of love, lust, intrigue, and treachery, we find the king on the horns of a dilemma.

He could marry an English nobleman’s daughter, cementing a relationship that could help him solidify control over the princes upon whose allegiance he depends. She’s a comely, but power-mad and evil-minded bitch.

Or he could wed a foreigner, the sister of the Duke of Normandy, and in doing so, gain a political ally against the warring Danes who periodically land on England’s shores to pillage and rape his kingdom. But that could alienate him from many of his subjects.

Which should he choose to be his new wife? And should she be merely a royal concubine, or given the title and powers of a queen?

And what of the sons of his first marriage? Should one of them inherit his throne, or will that honor go to a male offspring of his new bride?
The Historical Novel Society raises these questions about historical fiction:


“When does ‘contemporary’ end, and ‘historical’ begin? What about novels that are part historical, part contemporary? And how much distortion of history will we allow before a book becomes more fantasy than historical?”

The HNS says that


“To be deemed historical (in our sense), a novel must have been written at least fifty years after the events described, or have been written by someone who was not alive at the time of those events (who therefore approaches them only by research).”

By that standard, Shadow on the Crown clearly is a “historical novel.” The book was written ten centuries after the events it describes occurred, and its writing involved a great deal of historical research. The novel’s main characters were real people, although little is known about the lives of some of them.

But to me, it’s better described as a “historical thriller” because it features elements of the “thriller” genre, such as constant uncertainty and danger that the protagonist must confront and conquer.

I picked it up one last time, and then I put it down forever, after reading only a chapter or two. It was just so boring. There was no tension, no suspense, and no rhythm to the writing.

Shadow on the Crown is a reader’s curse. The storyline, full of advances and retreats, heading first in a seemingly obvious direction, then veering off toward a different place altogether, keeps you guessing. All I wanted to do was read it through in a single, all-night session.

When I saw the two and half page glossy of archaic English words that followed the “cast of characters,” I thought construing the dialogue and narrative would be a mind-boggling task. Not so. Those words are judiciously scattered, like sprinkles on a freshly-iced cake, throughout the book, adding flavor without slowing the pace of reading one bit.

How good is this novel? In my mind, it’s good enough to be dramatized on PBS “Masterpiece Classic,” or made into a major motion picture.

But how does the story turn out? Ah, you want me to be a “spoiler,” don’t you?

Sorry, I decline. You’ll just have to buy Shadow on the Crown to satisfy your curiosity, as I did mine.

But a word of warning: This book is just the first in a trilogy. So plan on spending many anxious moments waiting for the next book to come out, just as I will.
_______________________
Sales of Shadow on the Crown officially kicks off tomorrow, Thursday, February 7, 2013. At 7 pm that evening, Dick Jordan, will film the Shadow on the Crown book launch event at the Book Passage bookstore in Corte Madera, California for CMCM.tv.

Shadow on the Crown can be purchased in hardcover or as a Kobo e-book through the Book Passage Website. Author Patricia Bracewell and her publisher kindly provided Dick Jordan with an advance review copy of the book.

(From time to time travel writer Dick Jordan posts book reviews under the “Armchair Travel” and “Book Review” sections of his online travel magazine, Tales Told From The Road. His last post to the Book(ed) Passage blog was “Books to Give Travelers This Holiday Season.” Dick is a member of the National Book Critics Circle. When Dick isn’t traveling, you can usually find him hanging out with other members of Left Coast Writers at the Book Passage in Corte Madera on the first Monday evening of each month.)
Posted by Dick Jordan at 12:00 PM