Charming and a little different, Caroline Preston's new novel, The Scrapbook of Frankie Pratt (Ecco / HarperCollins Publishers), is a hybrid work where the pictures do the talking.One might describe it as something F. Scott Fitzgerald might have come up with for the Saturday Evening Post had he been a collage artist or even, in today's parlance, a graphic novelist. Like the best stories of that Jazz Age writer, this engaging work is poignant, tender and leaves you wrapped up in the tangled plight of its protagonist. 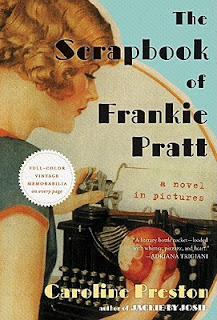 In many ways, Frankie Pratt is a typical small town young woman of the 1920s -- she's envious of the flappers she has read about in magazines, but is tentative about copying their modern ways. She is also looking for love and success, and dreams of being a writer.

For her graduation from high school, Frankie receives a scrapbook along with her father's Corona typewriter. A bright young thing, she begins to fill her scrapbook with clippings as well as her own thoughts and observations. Frustrated in her ambition, and about to see her dreams fade away, Frankie forgoes a scholarship to Vassar in order to help her widowed mother. Still living at home, a mysterious WWI veteran named Captain James sweeps Frankie off her feet; her mother must find a way to protect Frankie from the less-than-noble intentions of this unsuitable admirer.

Frankie eventually makes it to Vassar, and there crosses paths with other co-eds turned flappers as well as a real writer -- alumna Edna St. Vincent Millay, who encourages Frankie to move to Greenwich Village and pursue her dreams.

In New York, she finds a job writing for a pulp magazine while also experiencing big city heartbreak.  Frankie then sets off for Paris and en route keeps company with a spinster adventuress. Once in the French capital, Frankie takes a room above Shakespeare & Company -- the hub of expat life, and pursues her dreams until the Captain from her past reappears.

I was impressed, for example, when I read that the 1918 Corona Portable used by Preston in the typewriting of the captions is the same model used by another writer who came of age in the 1920's, Ernest Hemingway. That is the kind of detail one finds in this unusual book which helps enrich the story. (Font enthusiasts will know what I mean.) One reviewer has described this book as "lighter than lightweight" -- but in a complementary way. It is that, certainly, and also a lot of fun and a worthwhile read.

Preston's new book will also appeal to memorabilia collectors and those who scrapbook, as well as Jazz Age enthusiasts and those seduced by the charm and history behind Michel Hazanavicius' The Artist or Woody Allen's Midnight in Paris. They each tread similar ground. And what's more, there is full-color vintage ephemera from the author's collection pictured on every page.

Preston has collected antique scrapbooks since she was in high school, and has become an expert on the history of the scrapbook in America. She has worked as an archivist at the Peabody/Essex Museum and Harvard University Houghton Library. Preston is also the author of three previous novels, Jackie by Josie (a New York Times Notable Book), Lucy Crocker 2.0, and Gatsby's Girl. The latter is another charming Jazz Age period piece, the story of F. Scott Fitzgerald's first love -- a pre-Zelda Chicago socialite named Ginerva.

Posted by Thomas Gladysz at 7:00 AM