From the time of his screen debut in 1930, Spencer Tracy was considered one of the finest actors in Hollywood. The sturdy, congenial everyman won back-to-back Oscars in 1937 and 1938, and in the course of his long career, was nominated for the Best Actor award a record nine times. In 1999, the American Film Institute ranked Tracy among the ten greatest male stars in film history.

Adept at both drama and comedy, Tracy appeared in many popular and critically acclaimed films including The Power and the Glory (1933), Dr. Jekyll and Mr. Hyde (1941), Tortilla Flat (1942), The Old Man and the Sea (1953), Judgment at Nuremberg (1961), It’s a Mad Mad Mad Mad World (1963), and what would become his final work, the celebrated Guess Who’s Coming to Dinner (1967). Tracy, then 67 years old and in failing health, died only 17 days after filming was completed on the then topical Stanley Kramer directed film.

Since his death, Tracy has become one of the cinema’s most maligned and even misunderstood figures, the subject of both lurid stories and unsubstantiated claims, many of which center on the nature of his 26-year relationship with actress Katharine Hepburn. 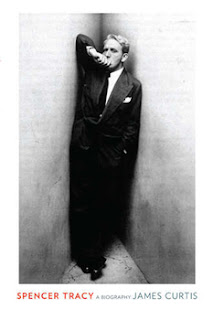 Last month, a major new biography of the legendary actor – the first in more than 40 years – was published. At more than 1,000 pages, Spencer Tracy: A Biography (Knopf, $39.95) attempts to set the record straight regarding the actor and the stories which have grown up around him. It does that in a rather detailed and definitive manner. This impressive book concludes with a frank appraisal of the bookshelf worth of recent biographies of Hepburn, many of which the author dismisses.

Spencer Tracy: A Biography is the work of James Curtis, one of America’s leading film biographers. Curtis is the author of W.C. Fields: A Biography (2003), which was named one of the Notable Books of the Year by the New York Times, as well as James Whale: A New World of Gods and Monsters (1998), and Between Flops (1982), a biography of Preston Sturges. Curtis also edited and wrote the introductions to Mae Clarke’s autobiography, Featured Player (1996), and John Weld’s long unfinished September Song: A Biography of Walter Huston (1998).

Curtis will be speaking about his new biography on Wednesday, November 16th at Book Passage in San Francisco's Ferry Building. Start time for this talk is 6 pm. Recently, Curtis answered a few questions about his new book, which has been described by film critic Leonard Maltin as “a scrupulously researched life story that is also well-written and completely absorbing … This is the book Spencer Tracy deserves.”

Thomas Gladysz: Your earlier work includes biographies of Preston Sturges, James Whale and W.C. Fields. How did you find your way to Spencer Tracy?

James Curtis: I think of these biographies as a suite of books looking at the same industry, at approximately the same time, from different angles. I’d done a writer, a director, and a comedian, so it was only natural to do an actor at some point. Tracy was always a personal favorite, and he really hadn’t been done since 1969, so the choice was easy. My wife had a business relationship with John Tracy Clinic, and it was through them that I was able to make contact with Susie Tracy, the daughter of Spencer and Louise Tracy.

Thomas Gladysz: Despite acclaim, back-to-back Academy Awards and an additional seven Oscar nominations, Tracy is not someone film historians or even film buffs talk about much these days. Do you feel his long, extra-marital affair with nine-time co-star Katherine Hepburn has overshadowed the telling of his life story?

James Curtis: I think so. Katharine Hepburn survived Tracy by 36 years, and there have been countless books about her. Because of all the misinformation out there about him, it was easy for the authors of these books to cast him in an unfavorable light. Here was possibly the greatest actor of his generation, and he had been reduced over time to the status of a supporting player in the Katharine Hepburn story.

Thomas Gladysz: Do you feel Tracy had a career defining film, or films? Which do you feel were his best works? Do you have a personal favorite?

James Curtis: Tracy made 70-plus films, so it’s difficult to single out just one as career-defining. I think what really put him over with the movie going public was the variety of roles he was given when he moved to M-G-M in 1935. In the space of a couple of years he played an innocent man deranged by mob violence in Fury (1936), the young priest in San Francisco (1936), a newspaper editor in the screwball comedy Libeled Lady (1936), a soldier turned criminal in They Have a Gun (1937), and the Portuguese fisherman in Captains Courageous (1937). That was quite a range to show for a top flight attraction at that time. The industry took notice with Academy Award nominations for San Francisco and Captains Courageous, and of course he won for the latter. And then he did Boys Town (1938) and won a second Oscar for his work as Father Flanagan.

Some of his best works were comedies – The Show-Off (1934), Libeled Lady, Woman of the Year (1942), Adam’s Rib (1949). He could do something as gut-wrenching as Fury and then play farce comedy with equal authority. Few actors could do that convincingly. That said, I’d have to say my personal favorite is Inherit the Wind (1960). He did a masterful job as Darrow, and the material is as important today as it was 50 years ago. I’ve lost count of how many times I’ve seen it.

Thomas Gladysz: You had access to Tracy’s papers. What were some of the surprising things you discovered about the man?

James Curtis: First, that his bouts with the bottle weren’t as frequent as I had been led (by previous books) to believe. And then there’s the depth of responsibility he felt – to his family, to his work, to an industry that didn’t always return the favor. In college he thought he’d study medicine, but quickly fell into acting. Later, when he was making steady money at Fox, he connected with an impoverished medical student and completely funded his education at McGill. Tracy felt that by going into the theatre he had left the world with one less doctor. This was his way of making up for that.

Thomas Gladysz: Your book doesn’t flinch when it comes to Tracy’s shortcomings, especially his drinking. The portrait on the cover (by Irving Penn) even suggests a conflicted personality, trapped by circumstance. Is that a fair assessment of the man?

James Curtis: Entrapment seems to have been a constant theme in his life. Circumstances compelled him to work as he did, just as his son’s deafness led his wife Louise to found John Tracy Clinic. There were aspects to his life that were larger than what a single human being could handle. Both Spencer and Louise Tracy were enormously gifted people who struggled to do their best with the cards dealt them. Neither was perfect, but there were aspects to both these people that bordered on genius. It’s not my job to be judgmental; rather I have aimed to illuminate their lives and what they did for others.

Thomas Gladysz: At more than 1,000 pages, your biography is larger than similar books. What was it about Tracy’s life and career that required such an expansive approach?

James Curtis: There were so many different threads to the story – Tracy’s technique as an actor, the alcoholism, the marriage, his Catholicism, the Hepburn relationship, the weird business of being a movie star. And then, of course, all the films and plays he did. My approach to a first draft is to use everything that might possibly make it into the final book, then to trim and shape the material. The manuscript was much longer; we cut a lot. But we came to a point where we had to decide what we were willing to lose; we realized we had cut a lot of the fat, and that we were now down to the muscle. That’s when my editor decided to let it run that extraordinary length – 878 pages of text. There are still a lot of things we could have removed that the reader would never have missed, but even if we cut it by half, it was still going to demand a great commitment on the part of the reader. So why not let it run its course? I’ve had people tell me that they would have been perfectly happy if the book ran 1,500 pages.
Posted by Thomas Gladysz at 5:15 PM

What a great man! He really is an inspiration for many of us.. Sweet! Thank you for sharing..