I've been thinking a lot about beginnings, first lines in literature. Which ones are satisfying and what makes them so? And others, admired by all, that still just leave me cold. My friend Susan and I walk around Lake Merritt every day and talk about this. Susan is writing a novel, and we are having , uhh, differences of opinion on the subject of first lines. There is a bunch of material on the internet about beginnings. Lists of the 100 best first lines in fiction. Advice to writers about how to construct a first line. Stuff like that.

Since I'm not a creative writer, I can't dispense writing tips with any authority. As a literary agent though, I have to take beginnings seriously. For me the first line is the most important sentence in the book. Editors are very busy people and receive stacks of manuscripts every day. If they get turned off by a clumsy first line, they are likely to cast a cold eye on the rest of the manuscript.

So here are a few of my random thoughts on this subject focusing on some illustrious examples.

This first line is always at the top of the list. The most famous first line in all of literature. So what's so great about it, anyway? I thought about that today and decided that it was overrated, that it is one of those things that people think is great because everybody else thinks it's great. It's catchy. It's different. But why would it lead me to read the rest of the book? What if I wrote a book that began: "My name's Andy"? I don't think it would make the 100 best list of anything. Why didn't Melville start with something like: "Ishmael's my name. Whales are my game."? Think about it. Tells a whole lot more about the story. It really is a better lead, -- wouldn't you say?

But stay with me on this. Let's dig a little deeper. Here is the second line in Moby Dick ."Some years ago--never mind how long precisely --having little or no money in my purse, and nothing particular to interest me on shore, I thought I would sail about a little and see the watery part of the world. It is a way I have of driving off the spleen, and regulating the circulation." Wow! Now that's writing. Here we have a book that does more than tell a story. It has the boldness to tackle THE BIG QUESTION; man's struggle for truth in the face of an indifferent and inscrutable universe. I mean, duh! We are not in "chick lit" territory here. And this second line ---- what would the critics call it? Understatement? Ironic foreshadowing? Because whatever this book is going to be about, you know it isn't going to be about sailing a little to see the watery part of the world. Magnificent!

This is pretty good as far as beginnings go. I'm trying to think of a better one. The only thing I can come up with as an alternative is: "Call me Yahweh". And that really doesn't work as well. But when we think of the Bible as literature, we really think of the King James Version which, as the learned biblical exegetes will tell you, is a triumph of form over substance. Not an accurate translation at all.

Here is a literal translation of The Book of Genesis from the Young Literal Translation Bible:

Not exactly something you expect to hear from the deep, rich voice of James Earl Jones. And can you imagine Michelangelo's God in the Sistine Chapel with little yellow and black butterfly wings "fluttering" on the face of the waters? I'll stick with King James, thank you very much. 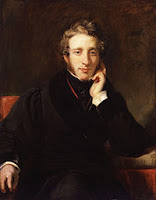 "It was a dark and stormy night; the rain fell in torrents, except at occasional intervals, when it was checked by a violent gust of wind which swept up the streets (for it is in London that our scene lies), rattling along the house-tops, and fiercely agitating the scanty flame of the lamps that struggled against the darkness". -- Paul Clifford by Edward Bulwer-Lytton.

This famous beginning has really become a kind of joke, a metaphor for bad first lines. Just mention it at a cocktail party of literary snoots, and you will hear uncontrollable guffaws and belly laughs around the room. Honestly, I don't think this is such a bad first line. Maybe a little overwritten with some murky syntax; maybe a little bloated; maybe a little attenuated by the author's sense of the of his own unmerited importance. But otherwise, not bad. It sets up the scene pretty well. The reader really has a sense of where he is. And it gives us a pretty robust foreboding of what will follow. Now let's compare it to this famous first line:
***
"riverrun, past Eve and Adam's, from the swerve of shore to bend of bay, brings us by a commodious vicus of recirculation back to Howth Castle and Environs."
I bet you can't name that one. It's Finnegans Wake, you moron! I bet you can't tell me what it means. I bet Thomas F**king Pynchon couldn't tell me what it means. Try dropping that first line at the literary cocktail party. No snarky snickers with this one. The room will be silenced by the crushing weight of your gravitas. And you might as well forget about your designs on that sexy assistant editor from Knopf wearing the black dress standing by the sushi platter. Because tonight you'll be going home alone to the solitude of your bedroom, Bub.

"If you really want to hear about it, the first thing you'll probably want to know is where I was born, and what my lousy childhood was like, and how my parents were occupied and all before they had me, and all that David Copperfield kind of crap, but I don't feel like going into it, if you want to know the truth." -- The Catcher in the Rye by J. D. Salinger

Oh yes. This is really sweet. I bet every modern writer has wished they could have thought of this beginning. And I suspect that many of them think of it still when they sit down staring at their blank page ready to begin their novel. By the way, gentle reader, if you know of any beginnings by great modern writers that are clearly derivative of this masterpiece, can you share it with other readers of this blog?

"In the second century of the Christian Era, the empire of Rome comprehended the fairest part of the earth, and the most civilized portion of mankind. The frontiers of that extensive monarchy were guarded by ancient renown and disciplined valor. The gentle but powerful influence of laws and manners had gradually cemented the union of the provinces. Their peaceful inhabitants enjoyed and abused the advantages of wealth and luxury." -- The Decline and Fall of the Roman Empire by Edward Gibbon

This is my favorite. I won't sully Gibbon's gorgeous beginning with an impertinent comment. Gibbon's language is commanding, lofty, elegant, and confident. Worthy of a work of such grandeur. What is even more remarkable is that this level of writing continues over six volumes and 3000 pages. And look at the vocabulary, the syntax, the voice and the cadence. It is the quintessence of perfection. It has the faultless precision of Mozart and the epic splendor of Wagner. I am in awe!

I'm going to leave this now. But I don't want this to be the last line. I would really like you readers to weigh in with your favorite first lines and why you love them.
Posted by Andy Ross at 7:29 AM

Still, here are three of my favorite first sentences (some of which are much greater after you've read the whole book, because they encapsulate so much):

The North Carolina Mutual Life Insurance agent promised to fly from Mercy to the other side of Lake Superior at three o'clock.

Kublai Khan does not necessarily believe everything Marco Polo says when he describes the cities visited on his expeditions, but the emperor of the Tartars does continue listening to the young Venetian with greater attention and curiosity than he shows any other messenger or explorer of his.

It must have been 1963, because the musical of Dombey & Son was running at the Alexandra, and it must have been the autumn, because it was surely some time in October that a performance was seriously delayed because two of the cast had slipped and hurt themselves in B dressing-room corridor, and the reason for that was that the floor appeared to be flooded with something sticky and glutinous.