Before Greg Mortenson and Three Cups of Tea, before Margaret B. Jones and Love and Consequences, before James Frey and A Million Little Pieces, and even before Clifford Irving and his Autobiography of Howard Hughes, there was Margarete Böhme and The Diary of a Lost Girl. If you haven't heard of it, you're not alone. 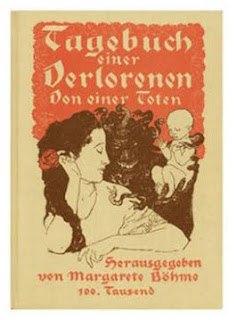 Despite its present-day obscurity, The Diary of a Lost Girl has some claim to being the Mother of all modern literary hoaxes. Like the above mentioned titles, this now little known 1905 book was a contested bestseller in its day. One contemporary scholar has called it "Perhaps the most notorious and certainly the commercially most successful autobiographical narrative of the early twentieth century."

The Diary of a Lost Girl purportedly told the true-life story - in diary form - of a young woman named Thymian forced by both circumstance and society into a life of prostitution. The book went on to sell more than 1,200,000 copies - a remarkable number for the time. And also like the above mentioned titles, its authenticity came into question. Some thought it an outright hoax.

Today, The Diary of a Lost Girl is accepted as a work of fiction. But when it was first published, it was said to be the genuine diary of a young girl. Böhme claimed only to be its editor. As "the editor" states in her forward, she was given the manuscript and intended to rework it into a novel. But, on the advice of her publisher, she instead presented it to the world as an authentic diary.

The book's publication and rapid success quickly led to all manner of speculation as to its authorship - with readers, critics, and the press divided. To lend its story credence, some early editions of The Diary of a Lost Girl even depict manuscript pages said to be in Thymian's hand. 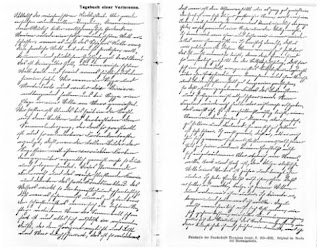 Both the author and her publisher, it should be noted, always maintained their account as to the origins of the diary. According to the forward of a 1988 German reissue, Böhme would forgo any claims as author as late as 1935 - a few years after the book had been driven out-of-print by conservative groups seeking to suppress it, and just a couple of year's before the author's death. Belief in its authenticity continued in some quarters for decades, even into the 1970's.

Why Mortenson did what he did has yet to be explained. Why Jones and Frey did what they did - passing off fiction as memoir - has been revealed. The motives of Clifford Irving and J.T. LeRoy and other hoaxers have come to light. But why Böhme presented her book as genuine isn't really known. 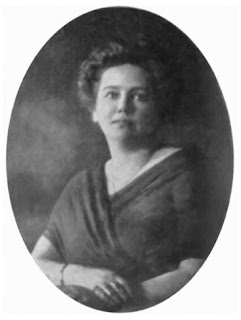 Some have suggested that the author, facing the double standard of the day, realized the personal and professional consequences she would suffer for having published a novel about the demimonde. Böhme, it should be noted, was then a struggling writer as well as a divorced woman and a single mother. There was nothing common about her.

Others have speculated that the book's claim to be an actual diary was a literary ploy to put over its provocative subject matter. Back then it wasn't considered acceptable for a woman to write about such things. At one point, Böhme herself was accused of being a prostitute - the thinking being how else could a woman have written or even edited such a book?

Certainly, The Diary of a Lost Girl is a knowing work. The literary critic Walter Benjamin, who wrote about it, described it as something like "A complete inventory of the sexual trade." In America, it was referenced in scholarly works on sexuality and criminal behavior.

In its 1907 review, the Manchester Guardian noted "It professes to be an authentic document, the actual diary of the woman it describes, unaltered save for the excision of some passages and the suppression of real names. There can be no doubt this is not the case. It is a careful narrative, directed toward a distinctly moral purpose. The psychology of it is arresting and unmistakably founded upon experience."

To the attentive reader - the force of its narrative, its detailed realism, its references to other literature of prostitution, and its psychological observations all betray a literary sophistication beyond that of a teenage girl.

Admittedly, there is a whiff of melodrama about the book; a newspaper in New Zealand once called it "The saddest of modern books." Ultimately, however, it is the book's subtle literary achievement which betrays its claim to be an authentic diary.

There have been many literary frauds and hoaxes over the years. Today, most of them have been forgotten. What makes The Diary of a Lost Girl stand out is its remarkable history, of which its contested origins are only the beginning. Dracula author Bram Stoker, for example, was said to be in favor of banning it. American novelist Henry Miller claimed it as one of his favorite books.

Within a few years of publication, The Diary of a Lost Girl had sold hundreds of thousands of copies and was translated into 14 languages. It was reviewed and discussed across Europe, and the book was said to have had some small influence on German social policy. Because of its popularity, there were even pirated versions in Poland and The Netherlands. 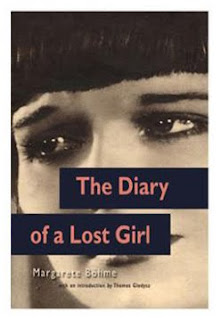 The book inspired a bestselling sequel (by Böhme in response to a flood of letters), a controversial stage play, a parody, lawsuits, two films, and sui generis - a score of imitators. There was also a film of the sequel, and even a French novelization of the 1929 German film made from the book. Because of it all - and in spite of it all, The Diary of a Lost Girl remained a steady seller for more than 25 years. It had a long run. The book was finally driven out-of-print in Germany at the beginning of the Nazi era.

Last year, after being out-of-print in English for more than 100 years, Book Passage staffer Thomas Gladysz brought this noteworthy book back into print. He added a few dozen images (of the author, of earlier editions, of scenes from the films), and wrote an introduction detailing the book's remarkable and contested history.

It is a good read. The Diary of a Lost Girl is available through Book Passage. To order a copy, just follow this link http://www.bookpassage.com/book/9780557508488
Posted by Thomas Gladysz at 9:18 AM