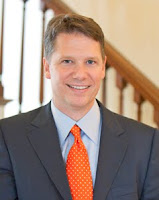 David Ellis (pictured left), who will be speaking at our Corte Madera store on February 14th, is accomplished in two fields.

Ellis is the author of Breach of Trust, a riveting new thriller published by Putnam. Ellis
has written six previous novels including The Hidden Man, Eye of the Beholder, In the Company of Liars, Jury of One, and Life Sentence - as well as Line of Vision, for which he won the Edgar Award.

Ellis is also an attorney in Chicago, Illinois. Notably, he currently serves as Counsel to the Speaker of the Illinois House of Representatives, and in that capacity, was the Impeachment Prosecutor in the Rod Blagojevich trial.

On February 14th, Ellis will read from and discuss Breach of Trust (Putnam, $25.95). In this new book, memorable Ellis character Jason Kolarich returns - as does his guns-blazing approach to justice. As it happens, his no-holds barred approach lands him smack in the middle of an FBI probe of the deeply corrupt and notoriously foul-mouthed governor of Illinois.

Of this new book, James Patterson has said, “David Ellis understands political corruption like no other writer out there — and lucky for us, his pages throb with action and suspense. Trust me, you won’t be able to put Breach of Trust down.” What Rod Blagojevich would have to say about it we can only guess.

Please join us on Monday, February 14th at 7 pm as David Ellis reads from and signs copies of Breach of Trust. If you can't make the event and would like an autographed first edition (available at no extra charge), please note in the comment field of your order that you would like a signed copy.
Posted by Thomas Gladysz at 4:43 PM