Late last week, Book Passage in Corte Madera was attacked by a roving band of papertoy monsters. According to eyewitness accounts, nine of the well crafted beasts massed in the children's section of the store, where they remain to this day. So far, no injuries have been reported. Only a lot of fun. 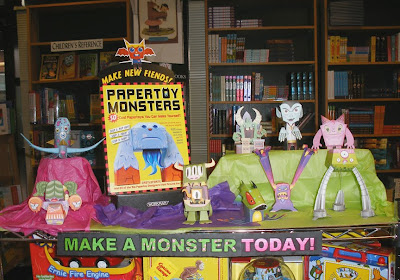 The attack (and display) was masterminded by longtime Book Passage employee Mary O., who spent a few hours detaching the perforated critters, then folding and glueing the intricate though easy to assemble paper constructions. It's the latest craze to sweep the nation.

According to Mary O., "I had so much fun putting these little critters together. Each one took me between 25 minutes and an hour. The only hard part was tearing out the perforated pieces. I used a glue stick and a ruler to make accurate folds. I was just going to make a couple for our book displays in Corte Madera and at our store in San Francisco, but the more I made, the more I wanted to make. I was listening to episode after episode of RadioLab on my computer and happily folding away when I realized it was after midnight. 'Just one more,' I kept promising myself, but I stayed up late two nights in a row making these cute little monsters! It was fun." 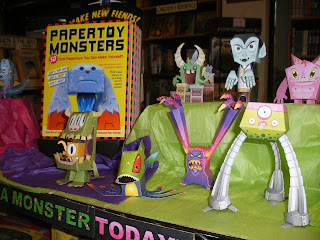 The delightful roving band of quirky critters come from Papertoy Monsters (Workman Publishing, $16.95), a paperback book available at Book Passage which features 50 fiendishly original die-cut full color designs by 25 of the hottest papertoy designers in the world. There are monsters from space, monsters from the depths of the ocean, mutant monsters, food monsters, event monsters monsters. Each monster is fiendishly fun and each is ready to pop out, fold, and glue. And what's more, each papertoy character comes with its own backstory. But wait, there's more - this popular book also comes with 10 blank templates for you to design your own papertoy monsters - which sounds positively Frankensteinian to us!

Papertoys are the latest craze - an internet phenomenon that's hot among graphic designers and illustrators. Now, the phenomenon comes to kids in this cool new book, Papertoy Monsters. To order a copy from Book Passage, please follow this link.blogged by thomas gladysz 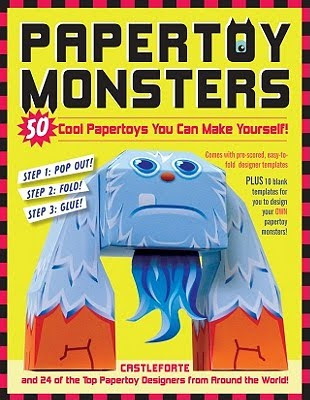 Mary O. says, "Get Papertoy Monsters before they get you!"

Posted by Thomas Gladysz at 1:18 PM