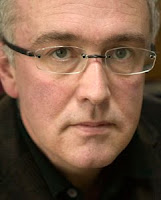 Was it the lilt of his Irish accent? Or the poetry found in his remarkable prose? Or was it the romantic and sadly tragic nature of the story he told - one based on the lives of a legendary Irish writer and a beautiful Irish actress? Whichever it was, last Thursday's event with Joseph O'Connor proved to be a memorable evening. Admittedly, we are still somewhat aglow over the event. What a remarkable opportunity - to see and hear and talk with this internationally acclaimed Irish writer.

Last Thursday, Joseph O'Connor visited Book Passage (it was his second event here) to read from and discuss Ghost Light (Farrar, Straus, & Giroux, $24.00). The novel is based on the affair between the famous Irish playwright John Synge (author of The Playboy of the Western World, Riders to the Sea, etc...) and a young actress named Molly Allgood (whose credits include the original Abbey Theatre production of Playboy of the Western World, the Alfred Hitchcock film Juno and the Paycock, etc...).

Rebellious, irreverent, beautiful, flirtatious, Molly is a girl of the inner-city tenements, dreaming of stardom. Witty and watchful, she has dozens of admirers, but it is the damaged older and tempestuous playwright who is her true secret passion - despite barriers of age, class, education, and religion. Out of their affair, O'Connor has crafted a beautiful story, seeped in the drama and history of the time. We think it very, very good - as does the New York Times. And so do others.

“When I think of Ghost Light, the words climb over each other to be first in the queue: brilliant, beautiful, exhilarating, heartbreaking, masterly. It’s that good.” — Roddy Doyle
“It has an astonishing command of voice and period detail, and offers an intimacy with the lives of others that is rare in fiction.” —Colm Tóibín
“A great ambitious novel about love and loss. Joseph O’Connor has the magic touch, and I can’t imagine many better — or braver — novels coming out this year.” — Colum McCann
“Ghost Light is a tender and compassionate love story, and a fine stepping stone to the majesty of Synge.” — Times Literary Supplement

Autographed first edition copies of this new novel are available through Book Passage, while they last. Follow this link to order a copy: please indicate in the comments field if you would like a signed copy. 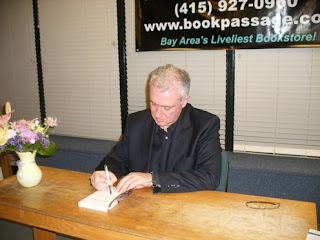 If you love Irish literature - or rather, if you love great literature from anywhere in the world, you should be familiar with Joseph O'Connor. His work has been published in thirty-five languages, and includes six previous novels: Cowboys and Indians (short-listed for the Whitbread Prize), Desperadoes, The Salesman, Inishowen, Star of the Sea, and Redemption Falls.

An international bestseller, Star of the Sea won the Irish Post Award for Literature, and France’s Prix Millepages, Italy’s Premio Acerbi, and the Prix Madeleine Zepter for European Novel of the Year. Oh, and did you know that a compact disc of O'Connor's radio broadcasts once topped Lady Gaga on the Irish charts! No wonder the French newspaper Le Monde described O'Connor as "The most exciting writer of his generation."blogged by thomas gladysz
Posted by Thomas Gladysz at 10:34 AM