Egypt is a Black Swan 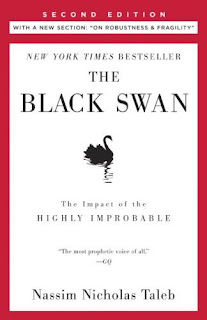 “Did you ever expect anything like this?” asked the newscasters on Al Jazeera television last week as the number of protesters on Egyptian streets swelled into the millions. The response from experts on International Security and Middle East politics was always the same: “Nothing quite like this.” Not these numbers, not protesters from of all walks of life losing their fear, risking their lives, refusing to back down.”

As I write the uprising in Egypt is entering its second week and at an impasse. Mubarak refuses to step down, while protestors hold firm in Tahrir Square. It’s hard to say if this will be another Eastern Europe 1989 or a Tiananmen Square, but whatever it is, I can’t help feeling a mixture of anxiety and excitement as I stream live cam scenes from Tahrir square when I should be sleeping. Fortunately the central concept of Nassim N. Taleb’s remarkable book The Black Swan, provides solace and a way of understanding these new events.

The Black Swan is a metaphor for the highly improbable event (that rare bird,) and I’m convinced that Egypt is one of these. According to Taleb, A Black Swan has a trio of characteristics.

Things get really complicated because typically after a Black Swan event occurs we create a narrative for why something happened, and fool ourselves into thinking we understand the future.This storytelling limits our range of options (let’s say our behavioral flexibility) even further as we remain less open to new world changing, life altering events.

What’s the best approach? To be humble and open, not so convinced of how we know what we know. Spending a few hours interacting through social media with Egyptian women protestors tweeting sure reminded me of the need for that. On the “Women of Egypt” FB wall people write asking if this could be another Iran of 1979. In response they seem offended and explain, “We have a different history. We are Muslim and Christian women together!” In response people from every corner of the globe post on the FB wall, “We wish you the best. Your courage is inspiring.” The best I can do is to listen and learn, aware that the world is not what I thought it was.


Taleb argues that this retroactive storytelling is an error: if we could have even conceived of Black Swans we would have acted entirely differently. The classic example here is 9-11 (for which Taleb gained widespread notoriety after describing an eerily similar airplane attack scenario prior to the actual event) but he cites both World Wars, the fall of the Soviet Union and the birth of the P.C. as similarly powerful Black Swans. As human beings we tend to a fool ourselves into thinking we can predict and control the future, when in fact those create such for a living forecasts have a dismal rate of accuracy. A key reason for this is that we (professional economists and ordinary folks alike) create narratives that are too narrow. In his words “we lack imagination.”.

It’s not just that these rare events happen, but that they are primary forces. According to Taleb, “A small number of Black Swans explain almost everything in our world, from the success of ideas and religions, to the dynamics of personal events, to elements of our own personal lives.” To wit, Black Swans are becoming more common, “while ordinary events, the ones we study and discuss and try to predict from reading the newspapers, have become increasingly inconsequential.”

Interesting, but what can we do? Should we just let others worry about highly improbable events? Not so wise, considering these shape personal lives as well (consider the impact of landing a single book deal.)

Taleb’s project goes beyond theorizing. Not only does he illustrate his points in an engaging, storytelling style full of personal anecdotes and biting humor, but he provides practical advice for living, and for those in professions where one lucky break can make a career (sound familiar fellow writers?) his approach is particularly powerful (he discusses career choices extensively.) Wisely, he advises us to be more humbl, more open more skeptical about how we know what we know.

In a nutshell, Black Swans (both positive and negative) are becoming more common, so we should act in ways that increase our exposure to positive ones, and minimize our risk to negative ones. One concrete action step: keep attending those networking events; you never know who you’ll meet.


About Karina Howell:
I help creatives, entreprenuers and change makers tell authentic stories to communicate their vision and move their strategies forward. My fascination with stories of the future began when at the age of 22 I did anthropological field work in Sao Paulo Brazil. Sitting in a circle with women factory workers in a crumbling community center as they described a new type of neighborhood, workplace, and democray: Learn more at www.forward-story.com
Posted by Karina Howell at 1:02 PM