What do “The Testicle Festival”, “Your Boss’ Bedroom”, “The Wiener’s Circle”, and “Groper’s Night on the Tokyo Subway” all have in common?  They are chapters in Catherine Price’s book, 101 Places Not To See Before You Die.

Seven years ago Patricia Schultz gave us the ultimate travel “bucket list” with 1,000 Places To See Before You Die: A Traveler’s Life List. In the introduction to her “sequel”, Price said that she decided to create an “antidote” to all of the “must-do” tomes that followed in the wake of Schultz’ book, so she came up with “a list of places and experiences that you don’t need to worry about missing out on.”


Price didn’t visit each of the 101 don’t ever go there locations in her book; she “called on travel-loving friends, family members, and, in some cases, complete strangers to tell [her] about overhyped tourist sites, boring museums, stupid historical attractions, and circumstances that can make even worthwhile destinations miserable.” Some chapters are actually a “Guest Entry” by another author: Michael Pollan, who wrote The Omnivore’s Dilemma, contributed “The Worst Meal in Barcelona”; Rebecca Solnit, author of A Paradise Built in Hell, described the bureaucratic Purgatory she found herself in at “The Customs Office at the Buenos Aires Airport” , and Brendan Buhler, staff reporter for the Las Vegas Sun, entices readers with “Fan Hours at the Las Vegas Porn Convention.”

Most of us would deem a visit to “A Vomitorium”, or being stuck on “The Top of Mount Washington in A Snowstorm”, or landing on “Jupiter’s Worst Moon” as a travel experience to be avoided.  Bypassing “Hell” or an overnight stay in “Garbage City” seems like good advice.  Skipping “An AA Meeting When You’re Drunk” is a no-brainer.  And what traveler would want to be trapped on “The Inside of a Spotted Hyena’s Birth Canal”? 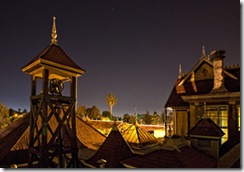 But some readers will will undoubtedly find that at least a few of Price’s “anti-bucket list” choices rank among their most memorable travel venues.  I’m sure that Euro Disney and the Winchester Mystery House have legions of fanatical fans.  “Times Square on New Year’s Eve” may not be Price’s favorite place to celebrate the beginning of the new year, but are the throngs that gather to watch the famous ball begin its descent counting down to 12:01 a.m. mere fools?   Devotees of Wall Drug, Mount Rushmore, and the Blarney Stone may be so incensed that they will set “vanity bonfires” and send Price’s book from ashes to ashes.

I enjoyed visiting Organ Pipe Cactus National Monument in Arizona, even though Price says that the “U.S. Park Rangers Lodge of the Fraternal Order of Police named it the most dangerous national park in the United States” and that you have “to deal with the desert’s 116-degree summer heat, venomous snakes, spiders, scorpions, centipedes, and of course, drug traffickers…”  As as often can be said about travel, “your experience may differ from mine”; I had a good time there during March a few years back when the weather was fine and the nasty critters, bad bugs, and evil people were nowhere to be found.

101 Places Not To See Before You Die isn’t really a guidebook for figuring out where not to go on vacation.  But it’s a “good read” that will give you plenty of chuckles especially when you’re stuck at the airport or on the tarmac, two places you hope you not to find yourself even one more time before you die.

(From time to time travel writer Dick Jordan posts book reviews under the “Armchair Travel” section of his blog, Tales Told From The Road. His last post to the Book(ed) Passage blog was “Think Globally, Give Locally Authored Books.”  When he isn’t traveling, you can usually find him hanging out with other members of Left Coast Writers at the Book Passage Corte Madera store on the evening of the first Monday of each month. HarperCollins, the publisher of 101 Places Not To See Before You Die, provided Dick with a complimentary review copy of the book.)
Posted by Dick Jordan at 11:32 PM

Email ThisBlogThis!Share to TwitterShare to FacebookShare to Pinterest
Labels: 101 Places Not To See Before You Die, Catherine Price, Dick Jordan, left coast writers, Tales Told From The Road