My Brief Romance with Math 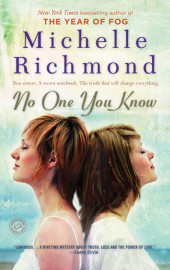 About two years ago, I found myself buying books about math. When my mother saw my bookshelf, she feared I was suffering a midlife crisis. After all, she remembered the misery I had experienced in high school and college when faced with the most rudimentary math courses.

One of the characters in my novel No One You Know (out this week in paperback) was a math prodigy at Stanford. When the novel begins, Lila has been dead for twenty years. Yet her absence continues to haunt her surviving sister, Ellie, a San Francisco coffee buyer. In the opening chapter, Ellie encounters a man from Lila's past while on a business trip in Nicaragua. This meeting launches Ellie on a search for the true story of her sister's life and death.

While Ellie is as unversed in math as I am, and while this is, at heart, a book about sisters and storytelling, the book could not be written without my knowing a little bit about Lila's passion: math. And thus, I began my brief and intensive study into what turned out to be, much to my surprise, the beautiful and highly imaginative world of mathematics. Below are three of the books that helped me along the way.

I hope you'll join me on Wednesday, May 20, at 6:00 p.m. at Book Passage in the Ferry Building to help me celebrate the paperback release of No One You Know. The paperback includes a Q&A conducted by my sisters, a playlist, and a reading group guide.

Books About Math, for the Layperson
A Mathematician's Apology by G.H. Hardy
In clear, precise language, Hardy defends the field of pure mathematics, emphasizing the beauty of math for math's sake. He eloquently touches on his own passion for mathematics, while stressing the fact that it is a young man's game. Hardy's admission that his advanced age has rendered him relatively powerless as a mathematician is stated without self-pity. A slim, sad, brilliant book.

Fantasia Mathematica by Clifton Fadiman
"The stories are suitable not for mathematicians," Fadiman writes in his introduction, "who will be bored by their naivete, but for non-mathematicians capable of being amused or surprised by the devious connections between the imagination and what would appear to be a discipline of the utmost rigor." Included herein are works by Aldous Huxley, H.G. Wells, Plato and Edgar Allen Poe, among others.

The Math Instinct: Why You're a Mathematical Genius (Along with Lobsters, Birds, Cats, and Dogs) by Keith Devlin
A highly readable and accessible volume, in which NPR's Math Guy argues that there are two kinds of math--"the hard kind and the easy kind"--and that a basic understanding of the "easy kind" of math is innate to all citizens of the animal kingdom, including humans.
Posted by Unknown at 4:13 AM